What can I expect from this blog?

Review of BUMPED, by Megan McCafferty

You know who's awesome? Megan McCafferty is awesome. I've been a fan of her work for some time. I first encountered her writing when I was killing time to meet someone and wandered into a bookstore, picked up the first book that looked interesting, and started reading. That book was Sloppy Firsts. I didn't buy the book that day, but I eventually checked it and its sequel, Second Helpings, out from the library. After devouring both books, I knew I needed to add them to my permanent collection, so to Amazon I went. And pre-ordered the next three books. And bought extra copies for friends, spreading the good word of the McCafferty worldwide. I've probably bought enough Jessica Darling books to make a pretty awesome igloo. 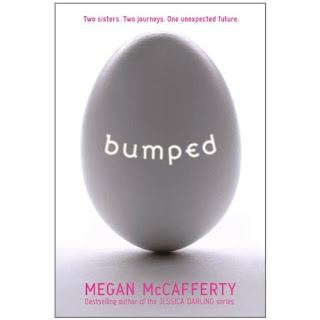 When I got to see McCafferty at a reading last year, she mentioned her new project, her first official young adult book, a wry, sarcastic, dystopian story about a world in which, due to a worldwide infertility epidemic striking adults, teenagers are the only ones who are able to bear children (and are consequently hired for this purpose). She described it at the reading as The Handmaid's Tale meets Heathers. I was already in the midst of infertility treatments back then, so you can imagine I was eager for this book to come out, in the same way that cats like looking at other cats on television.

Several months ago, ARCs (advance reader copies) of this new book, Bumped, began to be distributed. This blog itself was actually started in order to enter a contest to win an ARC of Bumped. I did not win that one or several other contests I entered. However, due to my incessant but nonthreatening (and dare I say, charming?) Twitter-stalking, I gave McCafferty my State of the Uterus address (state: barren), and she, in her kindness, arranged for me to get an ARC of Bumped, which I spent this past weekend devouring.

First, may I say how refreshing it is to read about a world where every single fucking adult is infertile? WE ALL LOSE! [maniacal laughter]

Bumped is set in a near-future where a virus has rendered most of the adult population infertile. As a result, teenagers are now the most prized members of society, the only way of continuing the human race (and up for the highest bidder). As the book opens: "I'm sixteen. Pregnant. And the most important person on the planet." I've read in interviews that McCafferty, in the culture of pregnancy pacts, and MTV's constant "Teen Mom" "16 and Pregnant" marathons, and debates over abstinence-only sex education, wanted to imagine under which circumstances teenagers would be encouraged to have sex. Her imagination and wit are evident here in her portrayal of what might happen in a society where teenage fertility is its most valued asset. The culture caters to and glamorizes the young and pregnant. Fertilicious. Pre-pubescent girls carry "My First Curse" purses, equipped for everything a girl might need when she first gets a visit from Cap'n Bloodsnatch. You can even buy a fake belly bump with "tasteful stretch marks" as a stylin' accessory, the way kids in my day used to wear friendship bracelets and banana clips. Drugs are commonly distributed like a school nurse handing out Tylenol in order to make teens lose their inhibitions so they can have procreative sex with strangers, or to prevent a pregnant teen from bonding with her unborn child.

The story is told from the shifting point of views of a pair of identical twins, adopted separately and recently reunited. Melody has grown up in this culture where fertility is a commodity, bought and sold and commercialized. Harmony has grown up in a religious (I picture Amish, as Harmony seems to be on the rumspringa to end all rumspringas) community where they still hold traditional values of marriage and parenthood--you get married young and you keep any babies that God may bless you with. Their paths start out diametrically opposed, but as the story progresses, their lives intertwine and come together like a melody and counterpoint (their names, which I originally found somewhat gimmicky, turn out to be a beautiful metaphor for these sisters' confusing, sometimes faltering relationship), occasionally filled with discord, but striving for resolution, in the same way that a counterpoint cannot help but resolve into unison with its cantus firmus.

My gut reaction was to distance myself as much as possible from Harmony and her Bible-thumping (side note: McCafferty is brilliant with her words, associating bumping [meaning, to have procreative sex, or the very act of getting pregnant for the highest bidder], humping [more of the procreative sex], and thumping [prosthelytizing the Good News] as well as linking pregg, to egg, to renegg) and identify more with Melody, but as the book unfolds, I found my sympathies shifting, then shifting back, then twisting around again. There's a lot of moral ambiguity here, a lot of people just trying to do right by their own codes of conduct, and at the end I don't even know what's right anymore.

Although The Handmaid's Tale is the Atwood book most will associate with this novel due to its similar subject matter, I found myself reminded much more of Alias Grace, and how that narrator struggles to make sense of two very separate parts of her psyche, as she tries to understand what has happened to her (a fantastic read and possibly my favorite Atwood). The power now given to teen girls also made me think of  the Salem Witch Trials--girls, usually the most powerless members of society, suddenly have all the power. In the Witch Trials, these servant girls with no marriage prospects and no escape from their station suddenly had power over life and death, just by accusing members of society of being witches (especially widows, who, of all the women in colonial society, had the most money, agency, and power). The teens in Bumped control the future, the survival of the human race. And, much like the accusing girls in the Salem Witch Trials, they simply are not emotionally ready for having that kind of power. They don't understand what it means, or what they may lose of themselves by buying too fully into the idea that they are the most important members of the society. They fail to see how they may be taken advantage of, exploited. The cutesy terms for procreating--bumping, pregging, being breedy, etc.--these serve only to trivialize the hugeness of giving up the child you've carried in your womb for nine months for simple monetary gain. And it is truly horrific to see just how much the cultural climate as portrayed in the book glorifies sex--not to sell products, but to sell, well, sex, so that even eleven-year-olds are clamoring, even rioting, for celebrity-studs to fertilize them. This is an Orwellian world, its propaganda designed to encourage the barely pubescent to get pregnant as quickly as possible.

For a dystopian novel, however, Bumped is wickedly funny. From the slangy, sharp dialogue to the ridiculous products Madison Avenue (or whoever controls advertising in the near-distant, infertile future) markets to the fertile few, Bumped is filled with moments of welcome levity and clap-your-hand-over-your-mouth-I-can't-believe-she-just-did-that shock (but the funny kind). One moment I'll find myself laughing that a character says that if she had plenty of sex while pregnant, and her offspring didn't end up "cock-knocked in the head"; then I'll be struck breathless from a bit of writing like "His revelation is confirmation of the knowledge I held in my heart all along. Faith is accepting what makes no sense, what we cannot prove, but know down deep in our souls is real"; or choked up from a character's memory of purposely tangling her hair in order to have just a few more moments of her mother's attention.

Bumped will be out on April 26, and I highly, highly recommend that you preorder it right now. It was a hard read for me at times due to the current State of My Uterus (to reiterate: barren), but it's beautifully written, funny, witty, imaginative, and grip-you-by-the-figurative-balls engaging, and I'm already twitching for the sequel like a crack addict wanting some cracktacular cracky crack crack crack.

So go forth and multiply [Megan McCafferty's income].
Posted by Bea at 1:53 PM

Bea
East of the sun, west of the moon
I'm a twelve year old stuck in the body of an infertile thirtysomething. I like books, swearing, artsy shit, and spirit fingers.